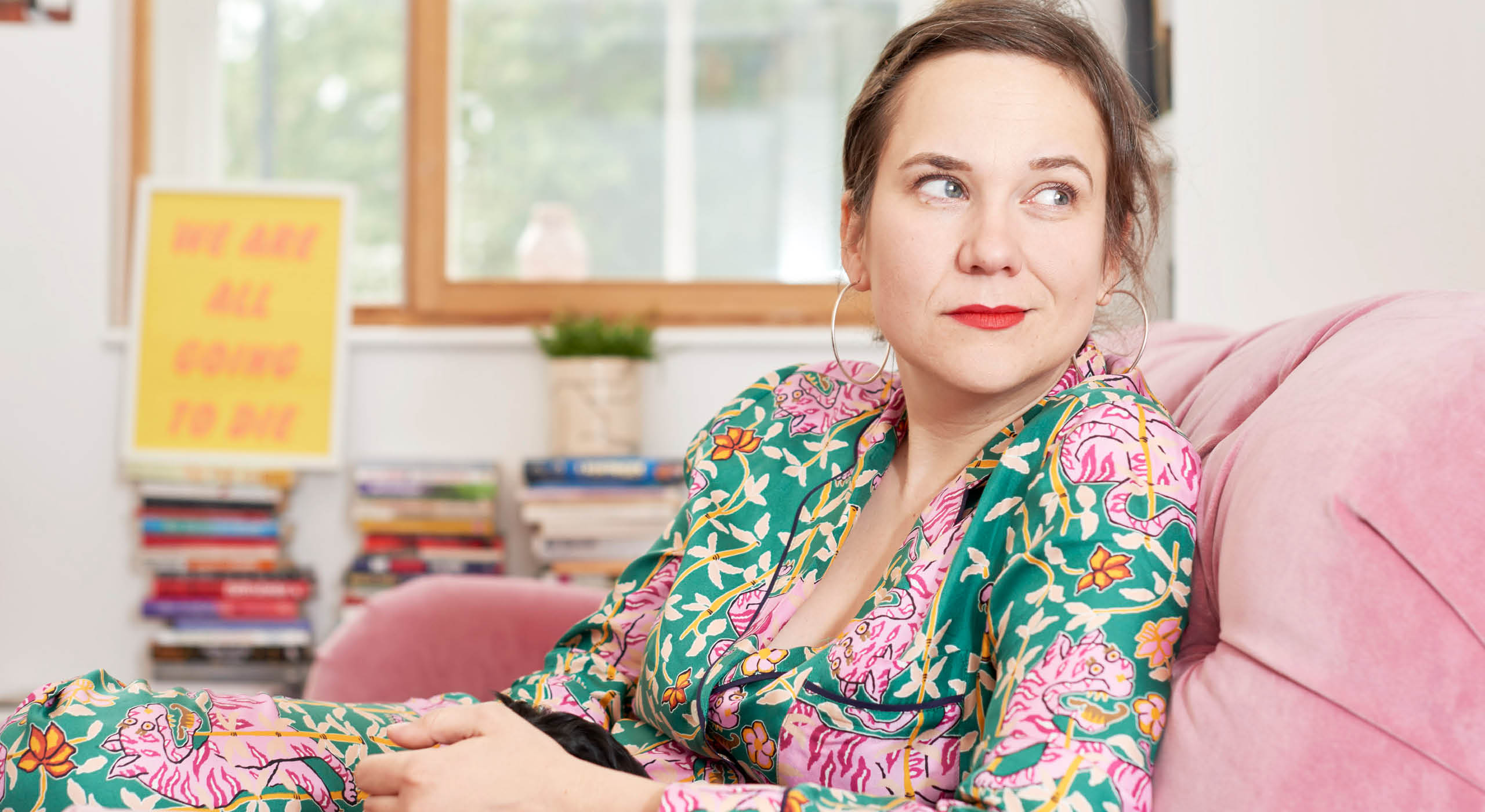 ‘I Thought I Couldn’t Fall Pregnant – And Then I Did’

What happens when a one-night stand has life-changing consequences

I hadn’t meant to have a baby at all. I hadn’t meant not to have a baby either, by which I mean I always thought I’d have children one day. I just thought those children would grow up with me and their yet-to-materialise father in a lovely farmhouse, hugged by the hills, with a dog and long, invigorating walks through the fields. This was not how I had grown up, but it wasn’t a million miles from it either. It was an idealised version of home, and it lived somewhere vaguely in my future as an unspecified certainty.

Exactly how I thought La Vida Farmhouse was going to appear when I was, in fact, living in a one-bedroom rented apartment in West Hollywood in 2010 isn’t clear. My apartment was just behind the Sunset Strip part of Sunset Boulevard, which was a place that encouraged in me a relationship with reality that could at best be described as negligible. I was working as a journalist, interviewing Hollywood celebrities for newspapers and magazines back home.

This was unreal life, where a friend offered me a free place on a health retreat on a ranch in Mexico, and I’d go to power yoga lessons where they told me and the wealthy Californians who surrounded me to feel the pain, and I felt the pain so much that I could barely manage the trip back to LA. By the time we got home I was unable to sit down. A day after that I was in the emergency room at Cedars-Sinai hospital in Beverly Hills.

It wasn’t clear to anyone quite where this agony was coming from, or if it had anything to do with the exercise at all. I spent a whole day being wheeled around to different tests, and having a cash machine wheeled right up to my face by a credit-cardiologist. Finally they told me that there was good news and bad news. The good news was that the MRI scan had revealed the main problem: I had something like a slipped disc and it would resolve itself naturally within a week or two if I was sensible, and simply became addicted to industrial-strength painkillers instead. Something like that.

The bad news, however, was that while they were poking around, they had discovered some trouble in my ovaries. Oh, I know about that, I said, I was diagnosed as having polycystic ovary syndrome in my 20s, I’ve been told it’s probably fine. Well, it isn’t fine now, they said, it’s much worse, and coupled with your hormone levels and your age and – hang on a minute, I thought, your age? I was only just into my 30s – all right, I was 34 – but nobody had ever said your age to me in that tone of voice, suggesting that I had used a lot of my age up already, rather than not had enough of it yet. Regardless, the doctor continued, I had the best kind of infertility, because I could still carry a child in my own womb. It was just that I would not be able to conceive naturally.

I went home, shut the door of my apartment and cried for a week.

What an idiot I had been, thinking that I could go back and make a family later, that I could work out how to have a relationship with a nice man later. I didn’t know any nice men. What I knew were exciting men, egotistical men, men who ran fast, whom you could sometimes run alongside, as long as you didn’t let out a single whisper of genuine need.

I told my friend Mal about this most awful diagnosis that had made me reconsider my whole life. And when my monologue ended, he smiled and said, “Sophie, all the doctors have said to you is that you can only get pregnant on purpose, not by accident. That’s it. Which is, as you would say, brilliant. So I think you should celebrate this amazing news by going out and fucking like it’s the 1970s.”

And that is the story of how I didn’t use a condom the next time I had sex, which would turn out to be the very next day, which turned into the story of how I became somebody’s mother for the rest of our lives, the end. Except it’s not the end, is it? It never is.

I remember feeling particularly hot that next night, as I left my apartment with Mal’s fantastically bad advice still ringing in my ears. I remember trying to walk confidently straight past the hotel reception desk, then stopping round the next corner to secretly check the text message again. Then I was beside the swimming pool, deserted but still floodlit. I remember hearing a noise and looking up and seeing him, a man I’ll call the Musician, grinning down at me.

We had known each other for about seven years by this point, ever since a mutual friend had introduced us backstage after one of his shows and our eyes had locked. Once again, we were now wrapped around each other like we had something to prove, and I suppose we did, even though I would spend many years afterwards wondering what it was. I took a big gulp of the whisky that was on my side of the bed while I laughed and said that we didn’t need to use anything, because I definitely couldn’t get pregnant.

The next day, when I got home, I sat down at my computer, opened a blank document and typed a paragraph that began with these words: “And one day I will tell you all about how you were conceived in a hotel room in Hollywood.” My hands seemed to be typing by themselves. A wave of anger rushed over me. It felt as if something beyond me had written it. I didn’t like it. Hadn’t I been told, just 10 days previously, that I would never conceive a child naturally? Was I taunting myself with a child who had already turned out to be a ghost?

I slammed the laptop shut and got on with my day.

Christmas and New Year came and went, and I found I didn’t like the taste of alcohol any more. I pretended to be doing Dry January, hiding the very confusing, nagging feeling that eventually led to me taking a pregnancy test.

I said we didn’t need to use anything, because I definitely couldn’t get pregnant

A couple of days after the test, I had to tell him. I had to summon up all of the strength inside me to break it to the Musician that he was going to be a father. I didn’t know if we were starting a family or starting a war. My best news – and it was, truly, starting to feel like my best news – could be his worst.

He was thousands of miles away and not expecting to hear from me. In fact, I talked so fast when he answered that he couldn’t hear what I said, which meant I had to take a deep breath and deliver my big news all over again. These phone conversations continued, over the weeks, turning into a big old argument: disbelief, terror and sometimes tenderness, too.

I tried to find a bigger apartment in LA, one more suited to babies and less to parties. Nobody would rent one to me, not once they’d taken a look at my rapidly growing bump and my rapidly shrinking income. With my tail between my legs, I moved back to London and began attending antenatal classes, where the husbands and boyfriends were taught all the helpful things they could do. I experienced the class solely as a guide to heteronormative marriage practices, with me the only single person there, feeling like the extra prick at a wedding.

Of course, this shouldn’t have been a thing in open-minded London in the 21st century. Technically, I had nothing to feel ashamed of, but shame is tidal; at certain times it wells up and surges on to the land. The loneliness of the long-distance runner has nothing on the loneliness of the single person in an antenatal class.

So imagine my delight when, about halfway through the course, one of the dads took offence at being told he should probably give up smoking, and he left. The numbers balanced out fine after that.

But then I was made into two. In the operating theatre, a baby was passed over the white curtain to me and she was my daughter, she was a broken star, a bloodied astronaut, a bloodied moon. She was a missile coming straight for me; an answer to the question that my body asked without me knowing. She was the smallest person I had ever held and the biggest thing I had ever seen. An alien who clearly knew everything about everything. I cried involuntarily. It came from me like a bark.

As a single parent, I have had to provide both things, the romance and the rules. The structure and playground, walls and soft landing, good cop and bad cop. You don’t ready someone to travel into a famine zone by starving them, so I have prepared my child for an ugly world by fattening her with love, like a foie gras goose. And when we are sad, we sit there being sad, crying, accepting, until we can laugh again.

As a child, I learned that sadness makes people uncomfortable, and it still makes me uncomfortable, if I’m honest. But what I know now is that it doesn’t always want to be fixed – rather it wants to be heard. In our house, I have made room for it, so it can come and go like familiar visitors do. It makes the happiness less frantic. I tried a lot of cures for existential angst, but becoming this person’s mother was definitely the one. She gives me somewhere to put all that love I’d been wasting on my fears. I want to be the safe place my daughter turns to at night, and wakes up to in the morning. The safe harbour. Unconditional. Not everybody gets one of those.